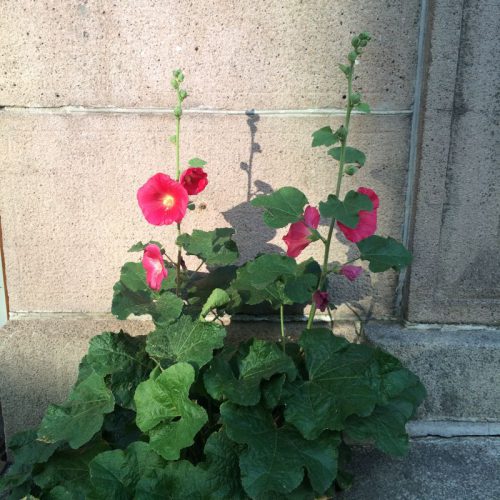 Monday afternoon, I meet Dave at the hotel and we head out the back way to dinner.  This bright pink hollyhock is by a stoop, and I think I photographed it everyday.  We head down Nansesngade Street, turn right on Vendersgade, walking towards Torvehallen, the Food Hall. 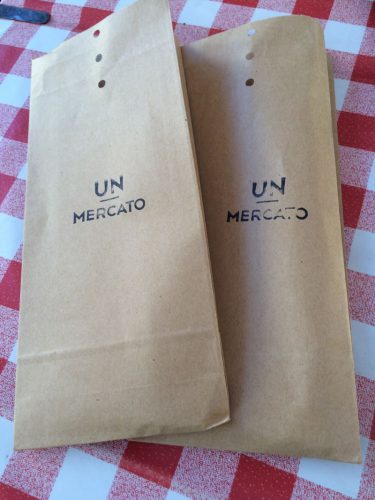 We ended up here and after ordering at the counter (they have a limited selection), they handed us our utensils and napkins in these paper bags and we found an empty spot (most tables are shared). 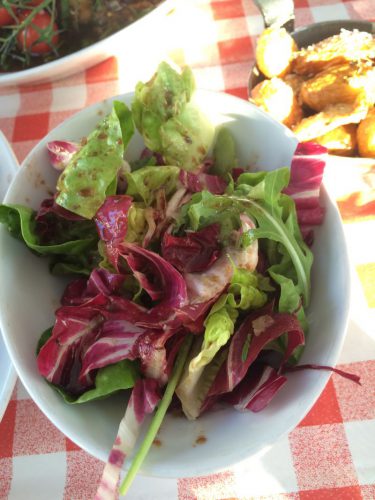 They brought our salad with our meal.  We shared everything (how could we not?). 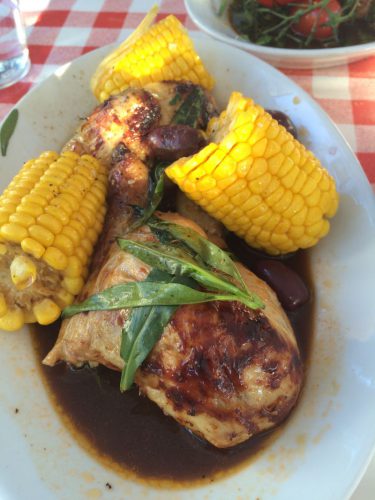 Roast chicken au jus with corn on the cob. 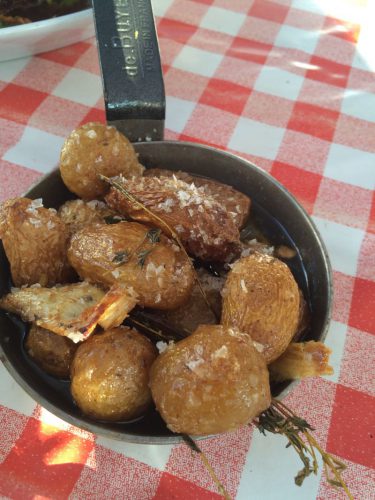 Roast potatoes sprinkled with fleur de sel: a winner.  The buttery juice underneath had whole cloves of cooked garlic floating in it.  Dave said these reminded him of the time we were in Lyon, buying food at the street market (marche); the rotisserie chicken sellers would rack up their birds, letting the juices drip down below to a catch basin, which was full of potatoes, being basted by the chicken drippings and juices.  Agree. 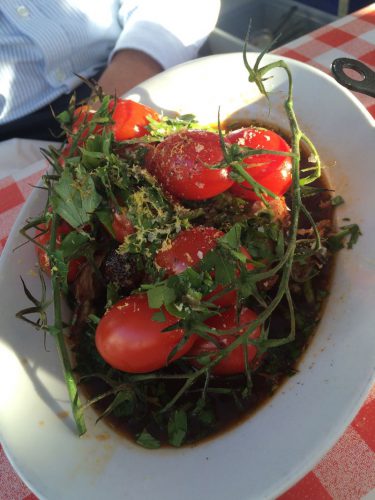 This was porchetta (stuffed pork chop) with those delectable tomatoes on a vine that you can find in Europe, but not so much where I live.  The tomatoes were lightly cooked, so they were warm and juicy, but not mush.

About halfway through the meal, two young women join us at our (communal) table.  Usually, because of the language barrier, it still feels private, as we are speaking English and whoever is next to us is speaking the language of the country.  While that was still true here, I realize that in Denmark (and found this again to be true in Sweden), just about everyone is fluent in English, so our veil of privacy is dropped.  I am careful about what I say in public because of this. 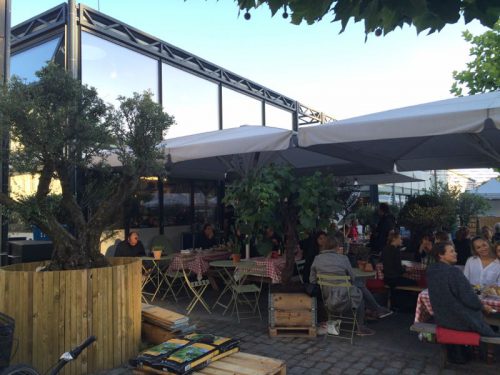 El Mercato’s tables under their umbrellas. 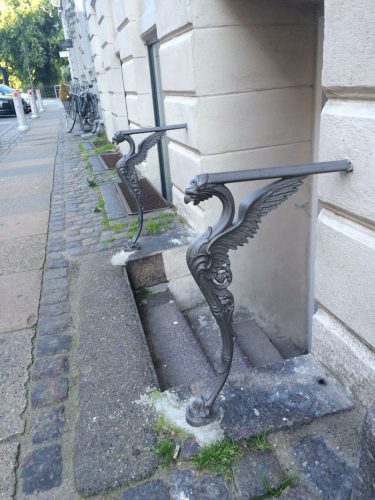 Now that we have been here a day, we are starting to get familiar with the little touches, like these winged bird balustrades alongside the steps leading down from the street.  We head out the back of Torvehallerne, turn right on Fredericksborgade, and arrive at the Metro station. (If you thinking typing the names of the streets is tough, try saying them.) 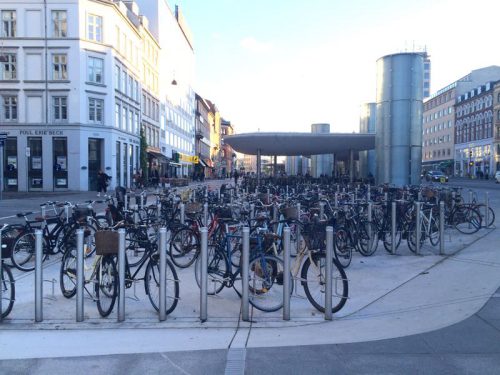 The bicycles!  This time we come at the mass from another angle and place; these bikes are all contained in a depression at the station, perhaps to keep them corralled. 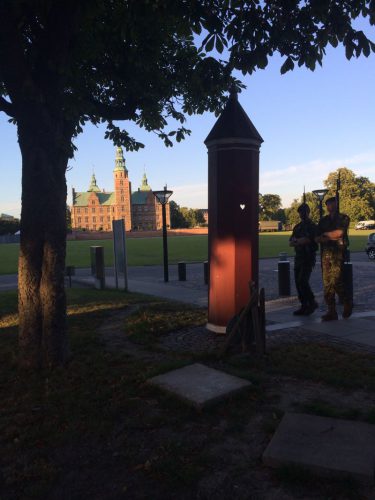 We walk along the backside of Rosenborg Slot, where the guards maintain a walk back and forth from one guard post to another, the sweet little heart cut-out just visible.  I never dare get too close, but it’s an interesting touch to have a heart on a guardhouse. 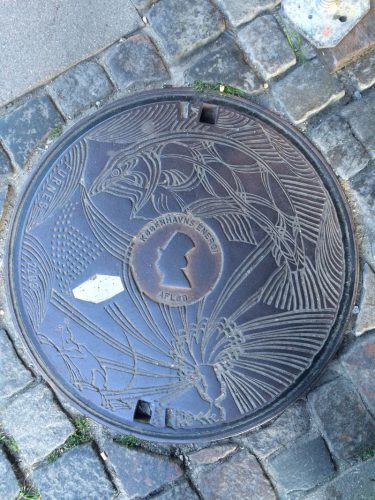 Hans Christian Anderson’s profile on the street covers.  Is this one water?  Electrical?  No matter–they have quite a collection of them. 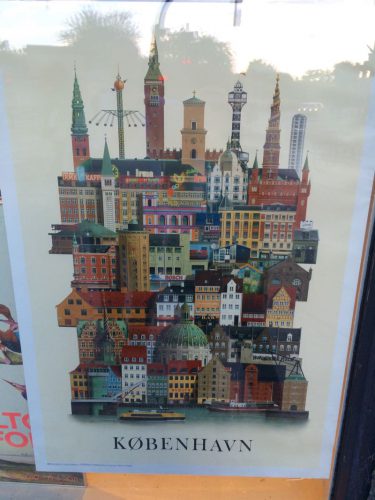 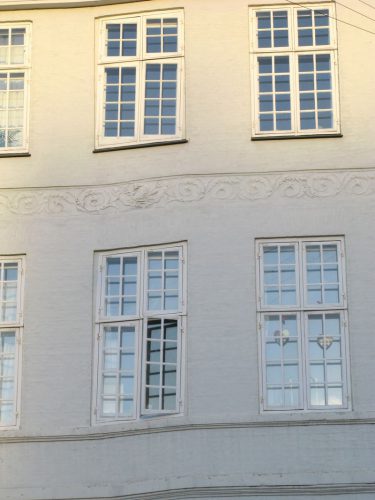 This older house has shifted: notice those crooked windows in the middle.  We turn right on Gothersgade (does “gade” mean street?) and continue walking.  I show Dave all the red brick buildings I saw earlier. 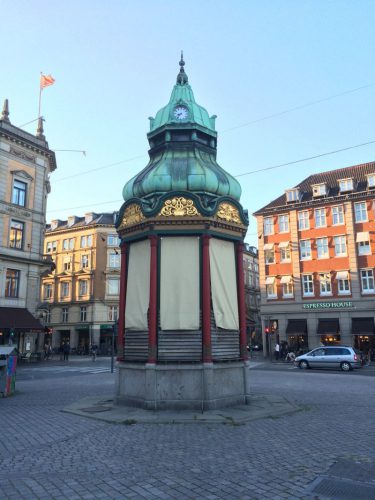 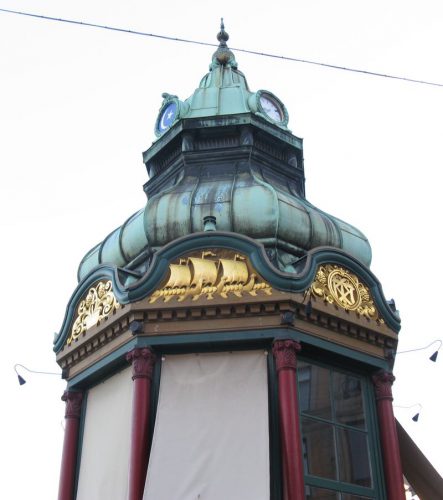 At the Kongens Nytorv square is another telephone box, but this time with different gilded designs. 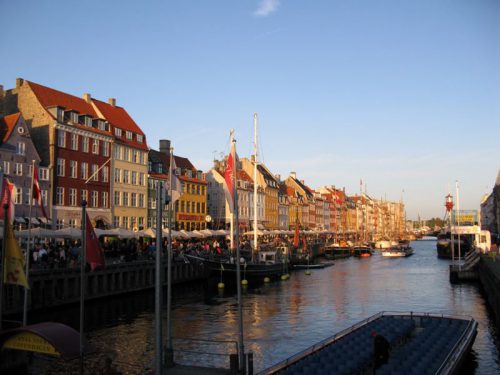 And ahead of us?  Nyhavn, a 17th century “waterfront, entertainment district, and canal in Copenhagen, Denmark.”  Dug by dug by Swedish prisoners of war  in 1660, “it is a gateway from the sea to the old inner city King’s Square (Kongtens Nytorv), where ships handled cargo and fishermens’ catch. It was notorious for beer, sailors, and prostitution. Danish author Hans Christian Andersen lived at Nyhavn for some 18 years”  (Wikipedia). 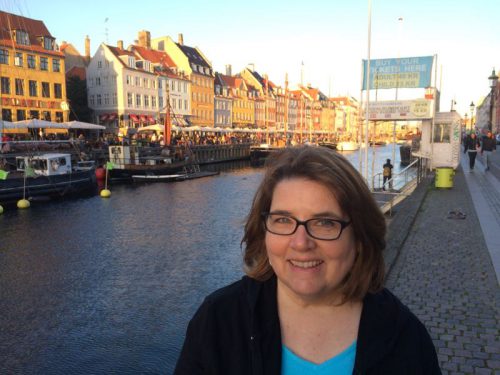 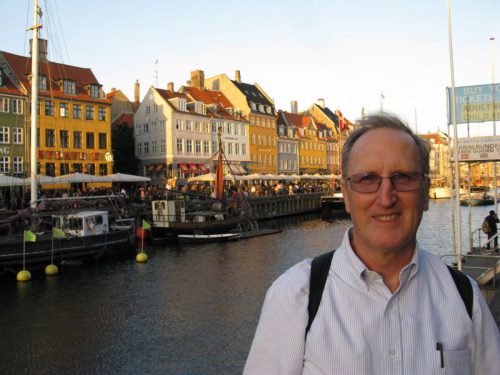 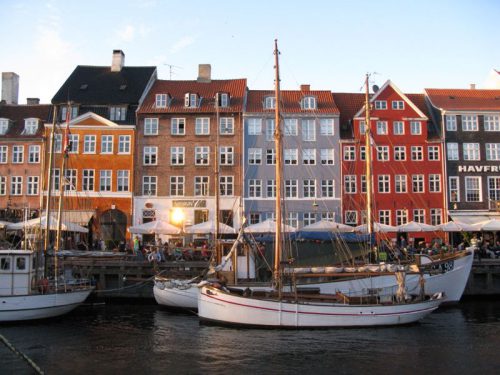 All I know that it is on every To Do List for tourists who visit Copenhagen.  Because Dave isn’t feeling well, we avoid the left side of the canal where it is mobbed with people, and instead walk on the right side, which we feel gives us better photos, anyway. We’re all about the photos.  We bump into a jovial trio of women, who ask us where we are from (America?  don’t we look like it?).  Apparently two of the women have traveled in to meet the third woman, who lives here.  She asks us how we like Copenhagen, and I say it’s great — except for the fact that I can’t find any decent chocolate.

Ah, she says.  You need to go to Magasin, the big department store at Konger Nytorv.  Go into the basement, and they have lots of chocolate.  I make a mental note to do that tomorrow, as I also have to go there to get my VAT tax back from Marimekko. 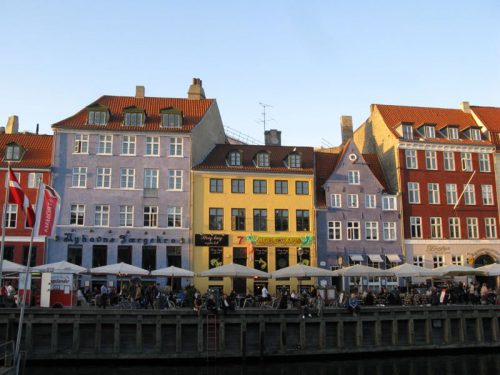 We go back to strolling and realize that the lavender house on the left does angle out to the right as it moves back from the street, invading the space of the yellow building.  At first I think it’s an optical illusion, but no.  It really is all stretched out of shape. 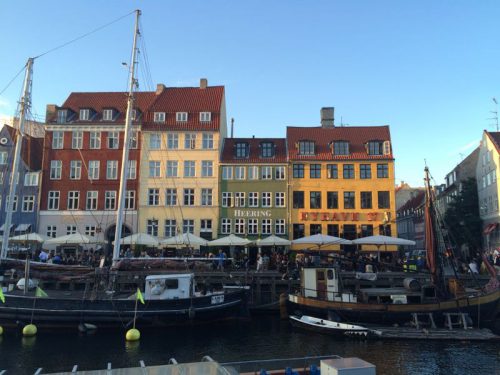 Nyhavn 17 is a restaurant, and I saw an earlier version at the Lego Store.  The oldest house, number 9, dates from 1681. 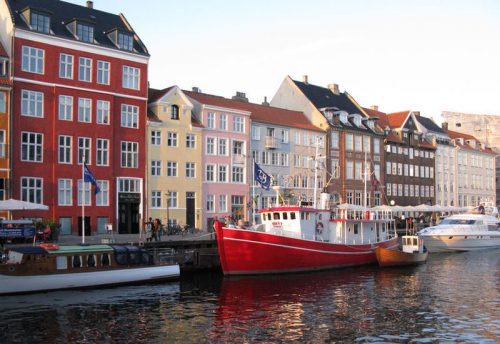 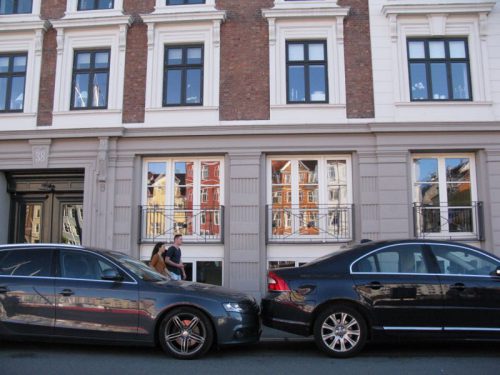 We rest on a #copenhagenbench, and enjoy the sight of the bicycles whizzing past us, as well as the reflection of the old buildings.  Two young women whoosh by it, coming to a stop at the light to our right.  I realize then that one young woman is on the bicycle seat, steering and pedaling, and her friend is behind her on the sturdy fender, holding down her short fluttery dress for her as they ride along, laughing at jokes that only young teens know. 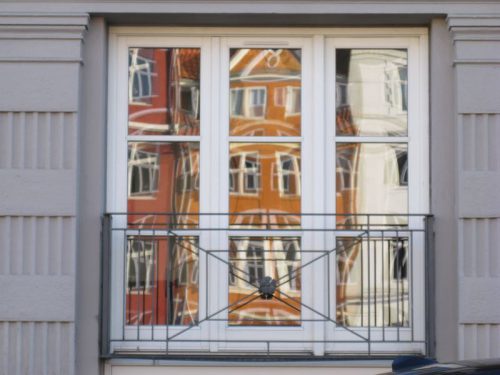 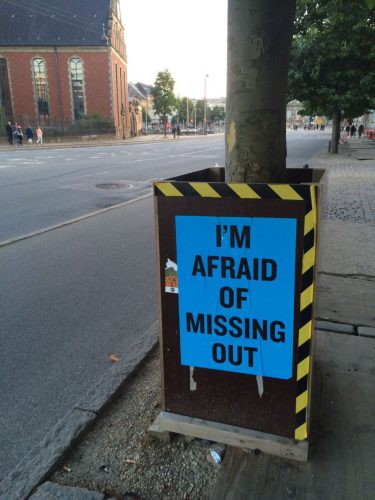 Time to head back to let Dave rest. 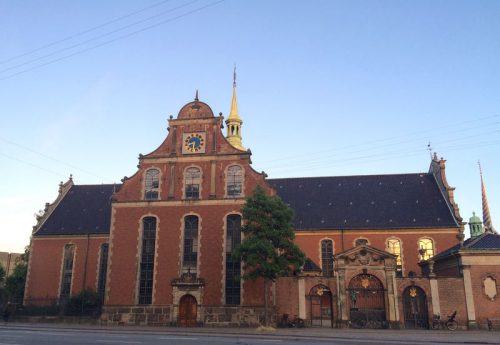 We turn right on Havnegade, coming up at Holmens Kirke, a church built for Christian IV in 1619.  Now as I sit here at home, writing this all up, I wonder, why didn’t we ever go inside that one?  I’ve found many sights I want to see again, so I guess I’ll have to come here another time.  See that twisty spire to the right of the church? 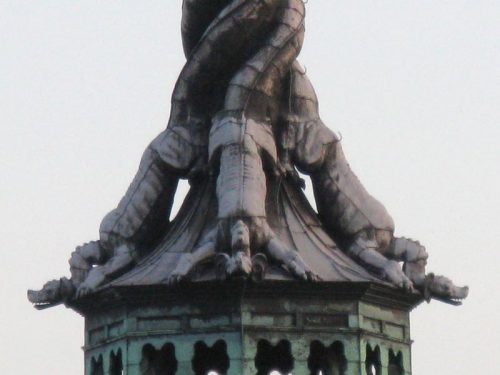 That is on the steeple atop Boursen, the former stock exchange from the 17th century.  It has four dragons with intertwined tails. 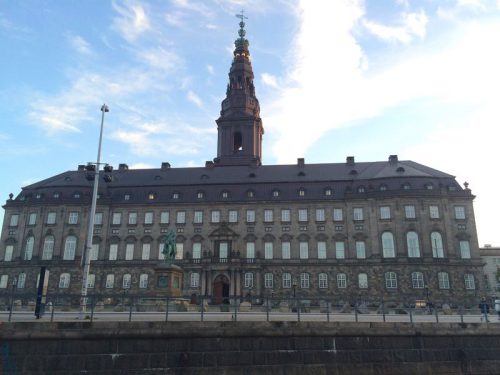 We walk past the Parliament Buildings, up Kobmagergade Street, which turns into a pedestrian and shopping zone. 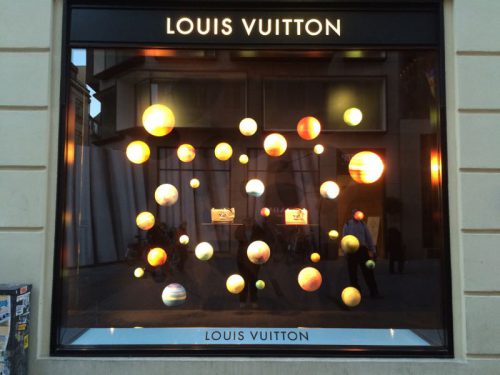 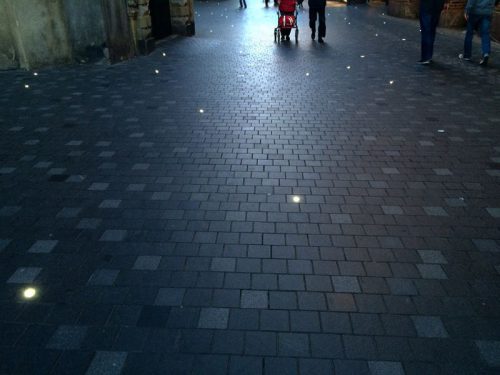 When the sidewalk stars come out at night, and the planets begin to shine in shop windows, you know it’s time to go home.

One thought on “An Evening Stroll to Nyhavn”