We’d heard about the El Anatsui exhibit from my sister, read the write-up in the New York Times, and put it on our list of Things To See.  Dave arrived home from his meetings around 6 p.m. and by 7 o’clock we had taken the 2/3 Red Line over to Brooklyn. 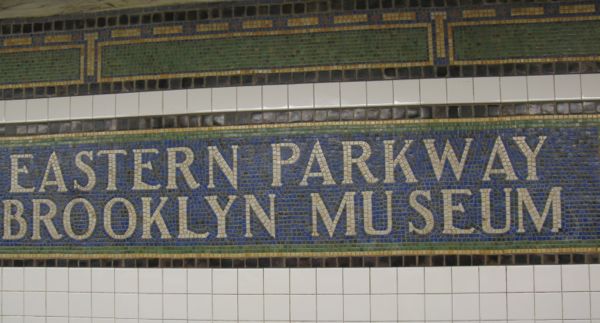 The museum stop lets you out right at the front steps.

The sun was setting, making the front of this glow. 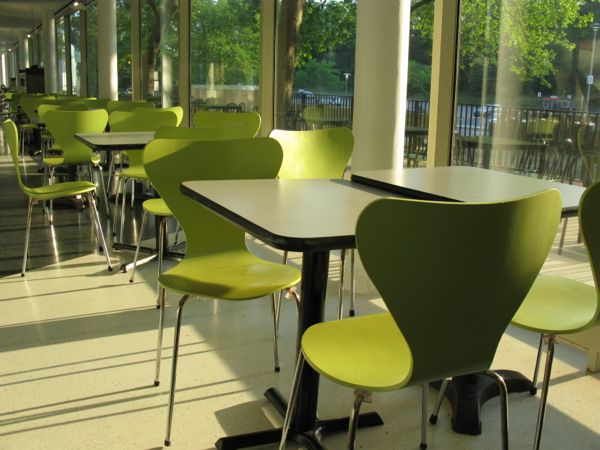 First stop was the cafe.  Although it has a great setting, we don’t recommend it.  Better to eat the mints in your purse than eat there. 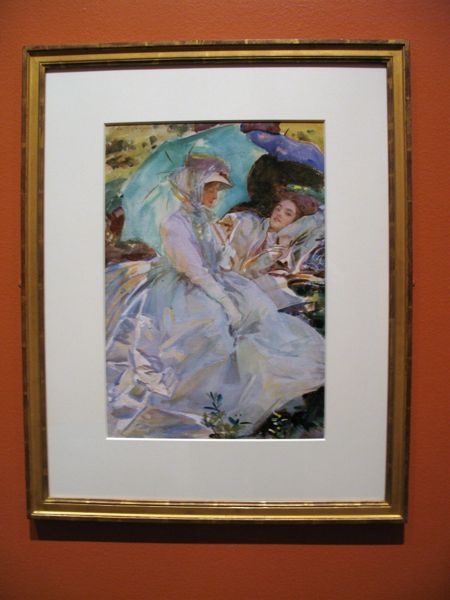 What brought us here were the John Singer Sargent watercolors that the Brooklyn Museum had put on display. 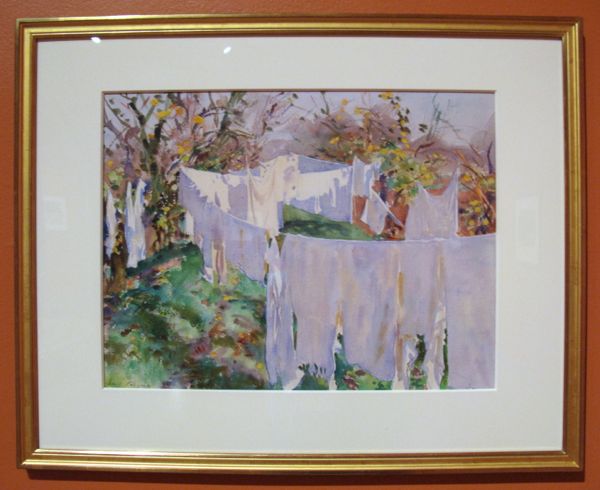 Sargent originally didn’t want to part with these watercolors, intending to keep them for his “own enjoyment.”  But he was finally persuaded to sell them all as a group, and the Brooklyn Museum was the new owner. 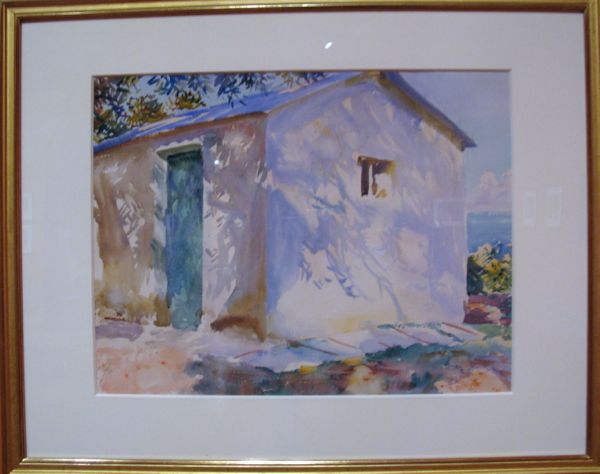 This one is my favorite, and everyone else’s too: it was sold out at the gift shop. While we came for the Sargent, we stayed for the next one: El Anatsui. 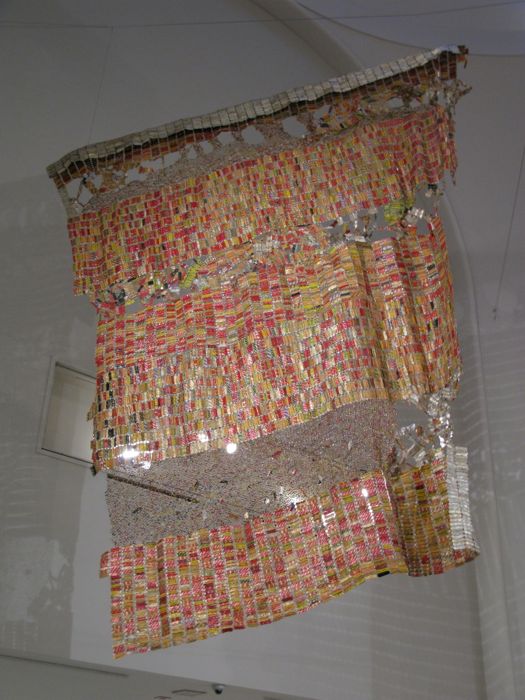 We entered the El Anatsui exhibit, walking into a large, high-ceilinged hall, where several of his creations were hung.  We knew a little about him before coming: that he used bottle caps and aluminum bands from liquor bottles to make these “patchwork” creations (that’s his word, found in his video at the museum).  His workers in his shop pound them flat, shape them and then they are put together to form these shimmering curtains, looking light as air. 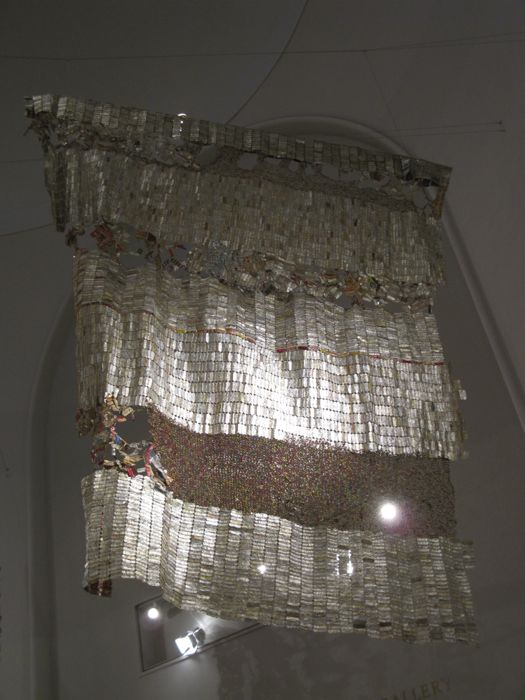 They float in the air currents, moving ever-so-slightly. Here are a few closeups detailing the construction of these pieces: 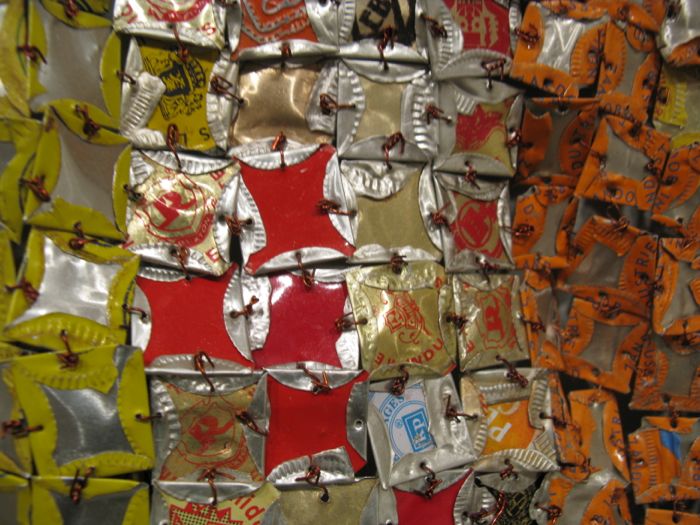 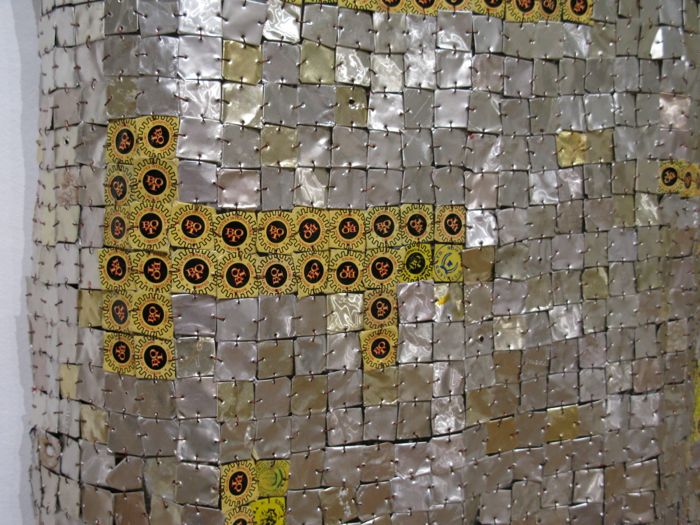 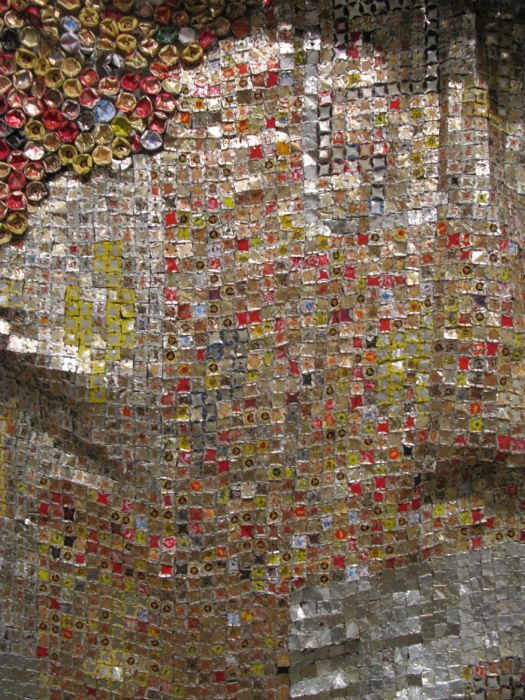 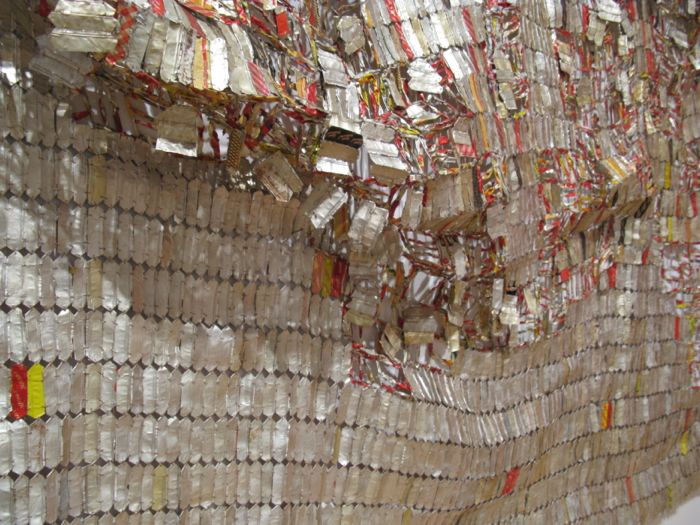 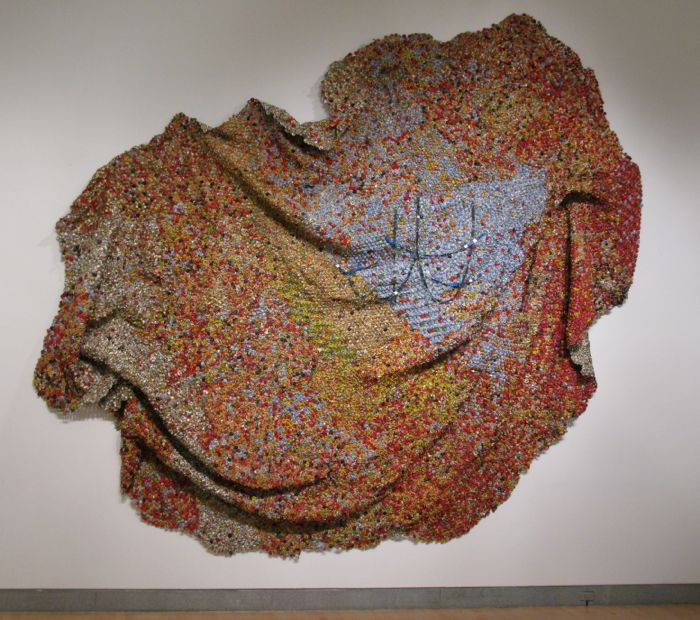 From the title card: “This work has no specific orientation and illustrates the artist’s desire for his art to reflect the ever-changing condition of life.  Anatsui also wishes to inspire creativity in the people charged with installing his work and says he merely provides ‘data’ for others to reenvision and manipulate.” El Anatsui is the name he took as an artist, preferring, it’s said, to keep the name his parents gave him to himself. 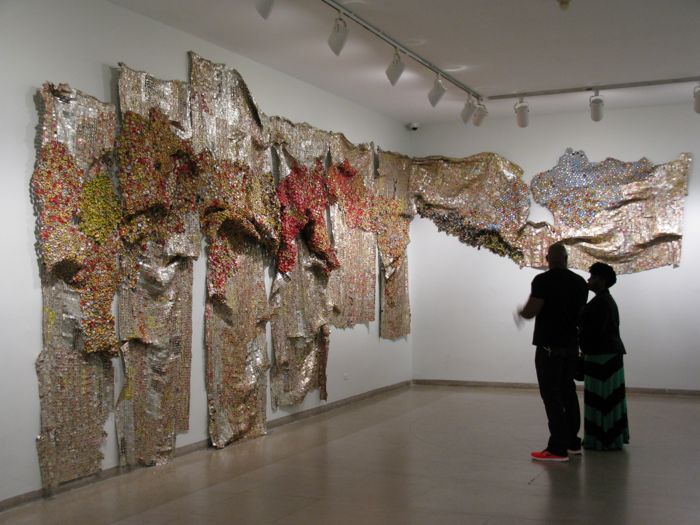 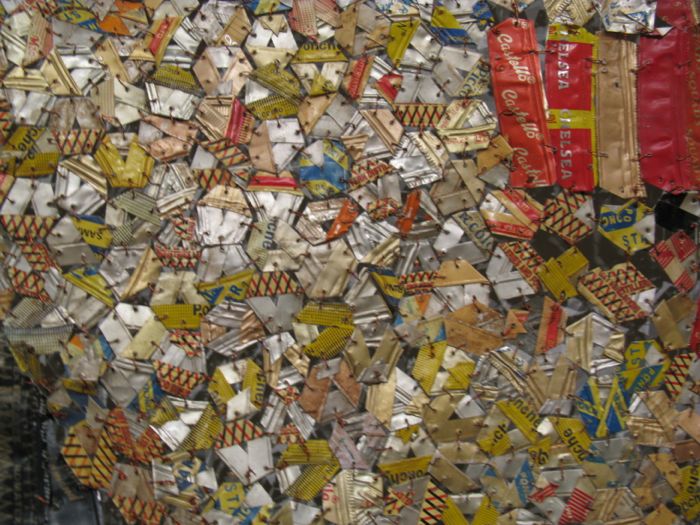 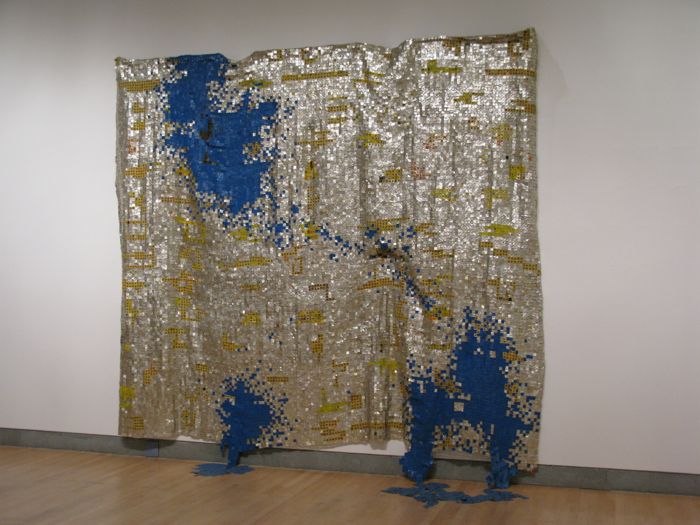 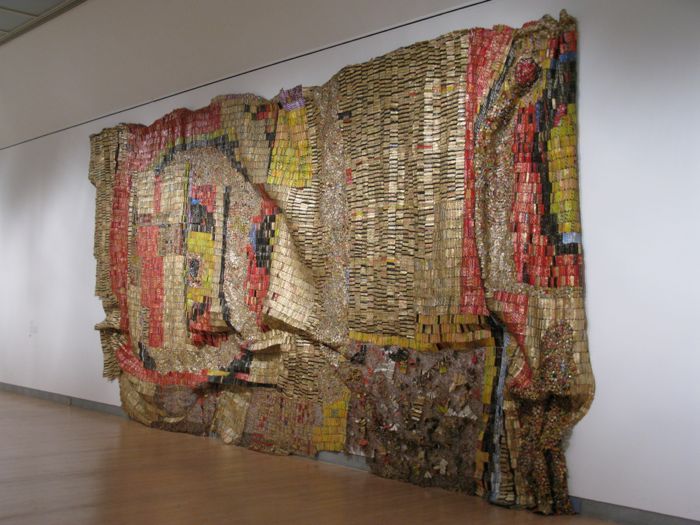 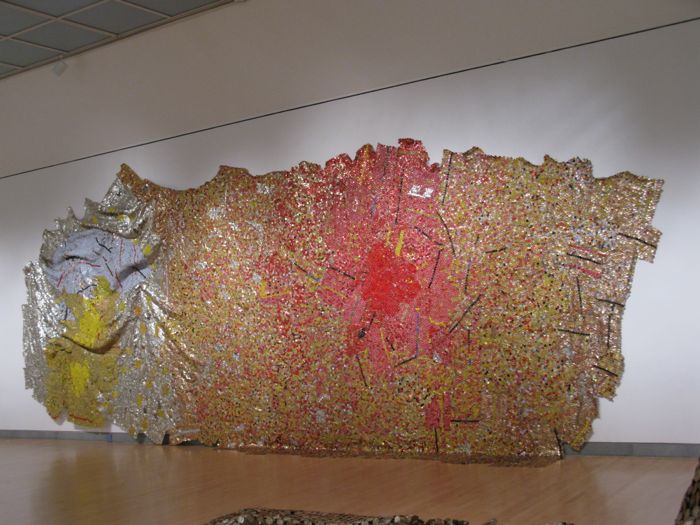 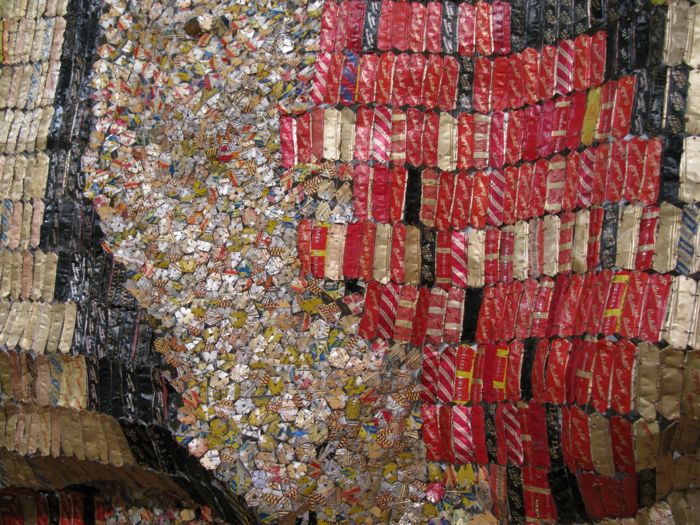 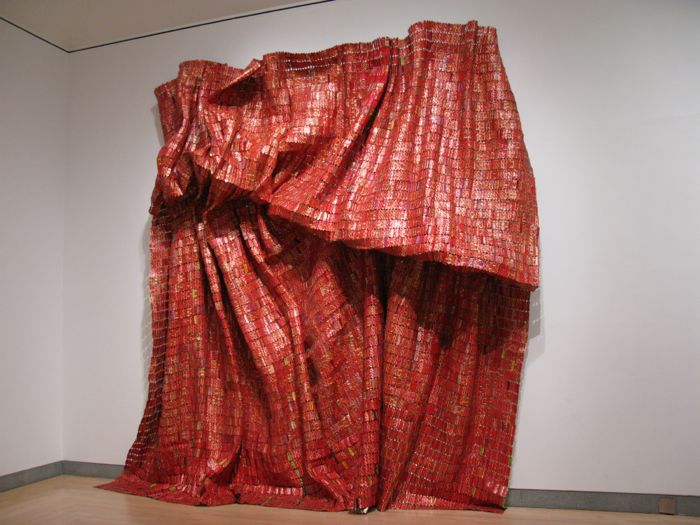 Red Block and Black Block, hung side by side 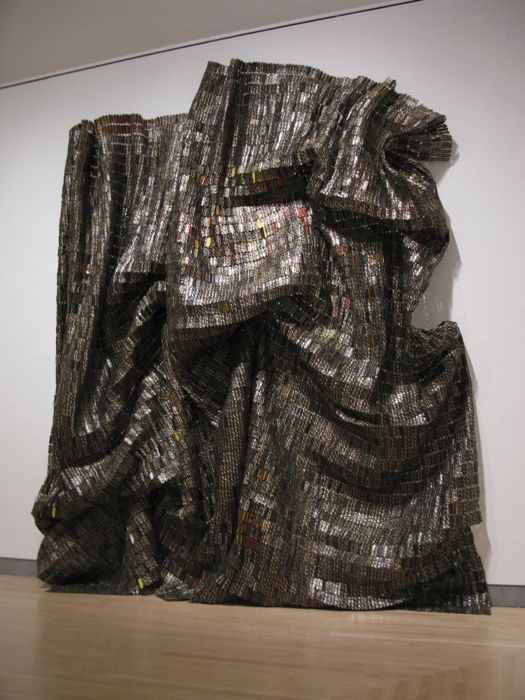 The museum put up a video showing the hanging of this exhibit: Gravity and Grace.

Fascinating and amazing exhibits.  We also saw Judy Chicago’s Dinner Party, which left us un-enthused (misplaced 1980’s Feminist angst?), and series of quilts over 150 years old, which were good examples of popular quilt designs, such as Star of Bethlehem, Flying Geese, and two different kinds of crazy quilts.  All in all, a satisfying evening at the Brooklyn Art Museum.