This is not a chant from the Sacro Monte (Sacred Mountain) chapels, but rather an admonishment from a sign on Orta’s island. More on that later.

We parked our car in the modern car park garage and strolled down to the town of Orta, as it is pedestrian only in the center. 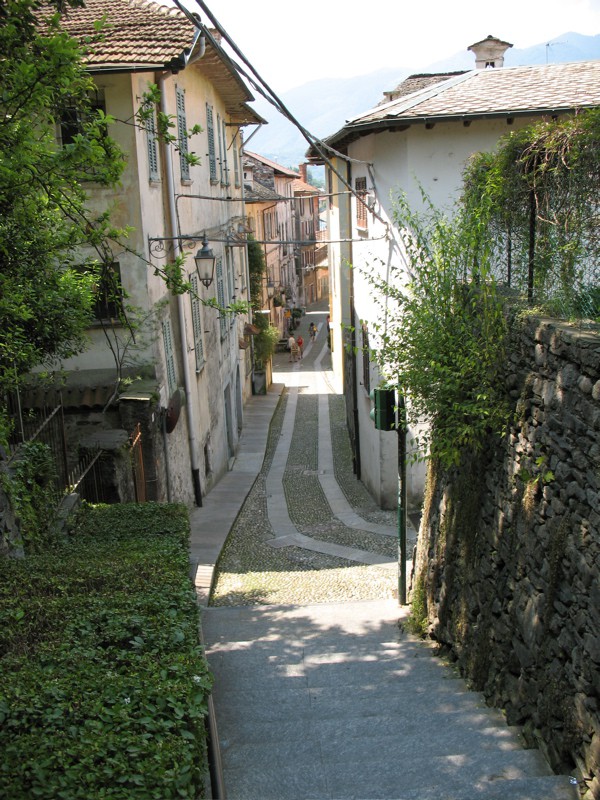 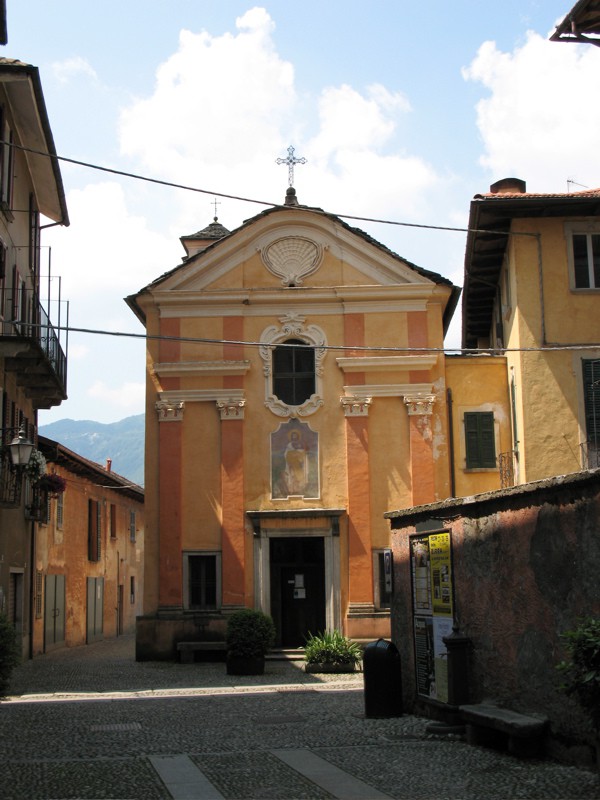 Orange seems to be a popular color for churches around here, but it works well. 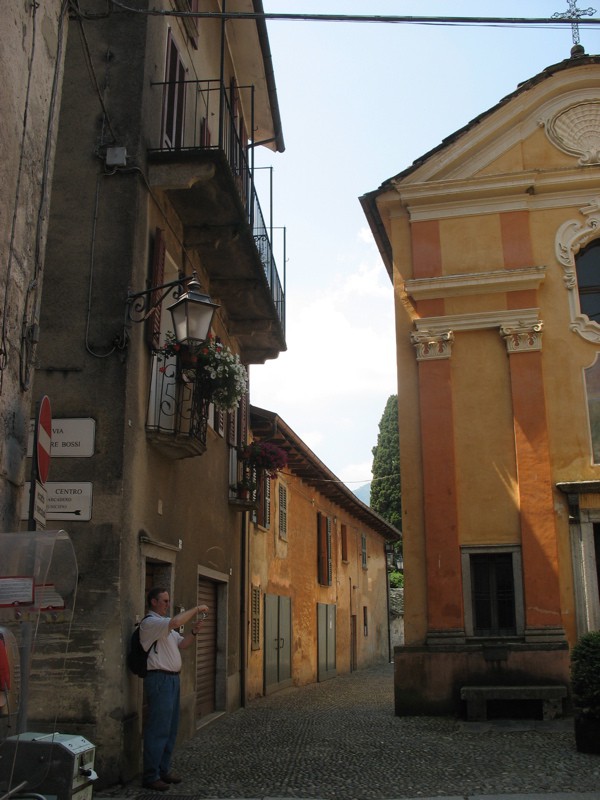 Dave shooting another photo. He took the one of the church, above. 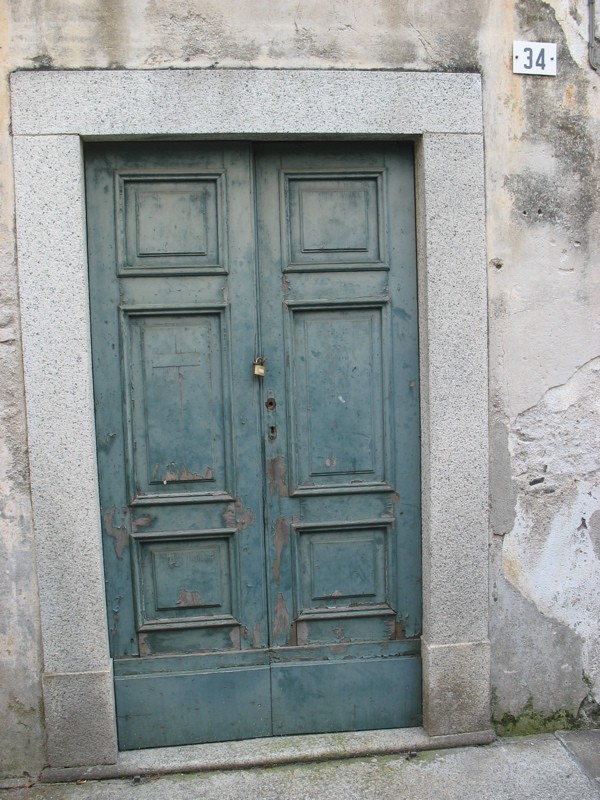 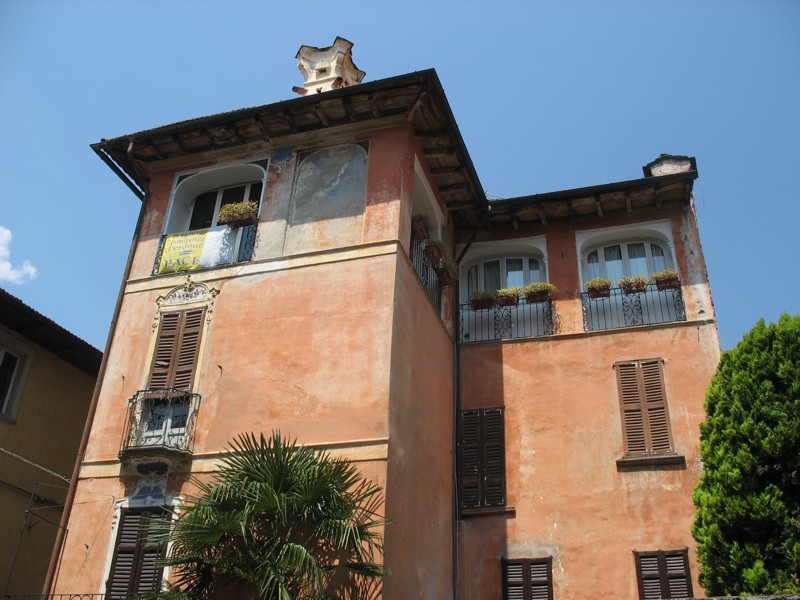 This town had several cool-looking chimneys. Here’s one of them. 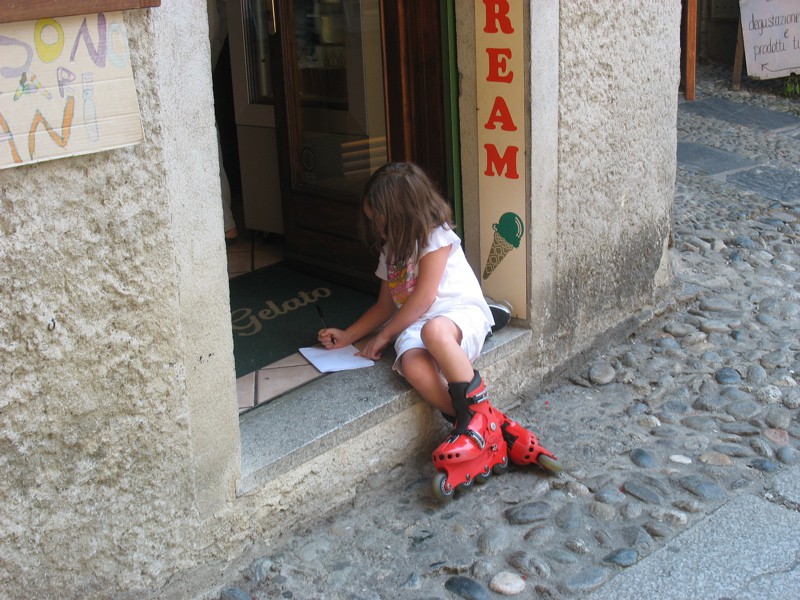 Luckily for this skater, there are two smooth paved sections down the center of each cobble-stone road. 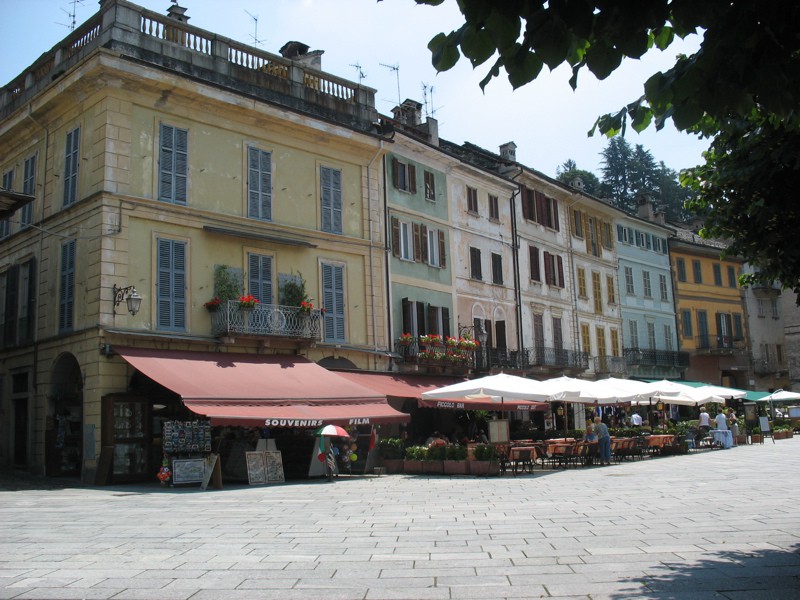 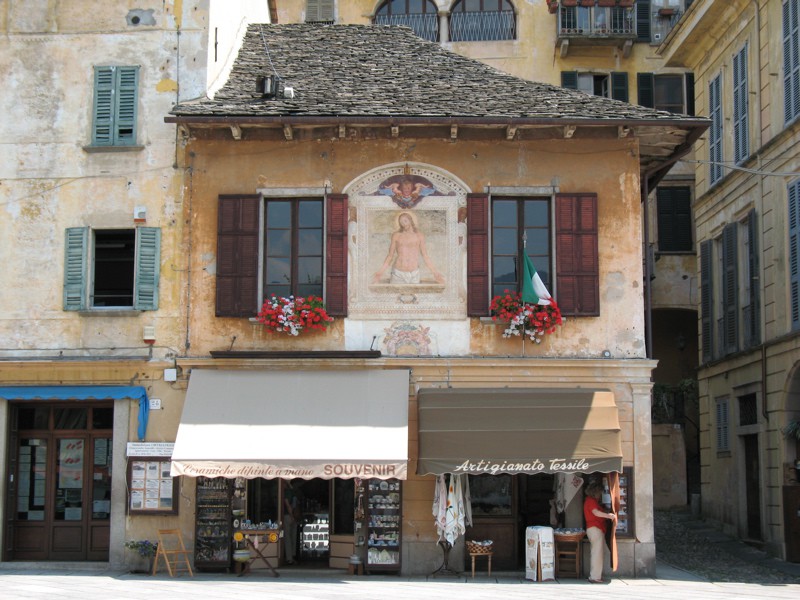 . . . except not too many have pictures of Christ above the souvenir shops. 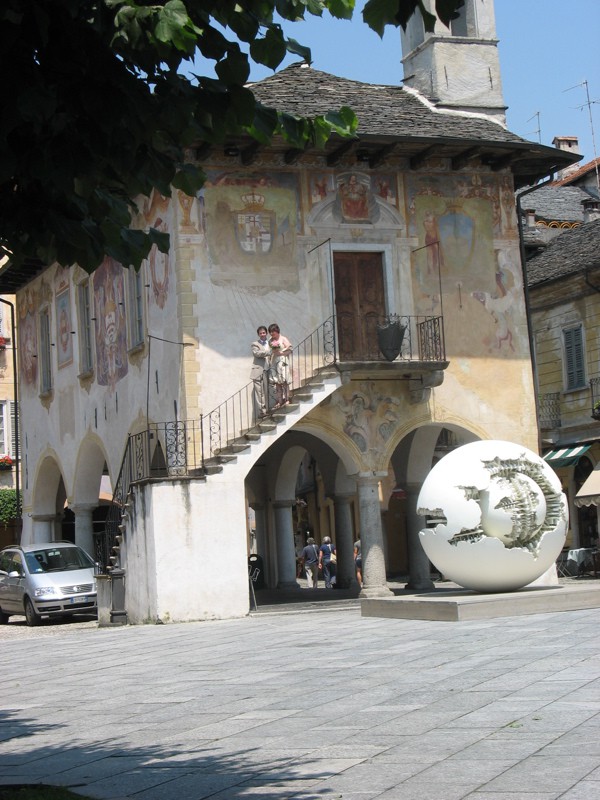 We could hear the clapping from a wedding (my assumption, not Dave’s) when we walked by the City Hall. A few minutes later, the bridal couple (posing for a picture here on the steps of the ancient Administration Place) came down to the square, leading a posse of guests behind them.

The sculptor of the machine-ball appears to be the same one as Matthew’s favorite sculpture from the Vatican museum. His work is also at the Hirschorn. His pieces were all over Orta, everywhere and we passed what we think could have been his house on the way home. Each one reminded of us Matthew. 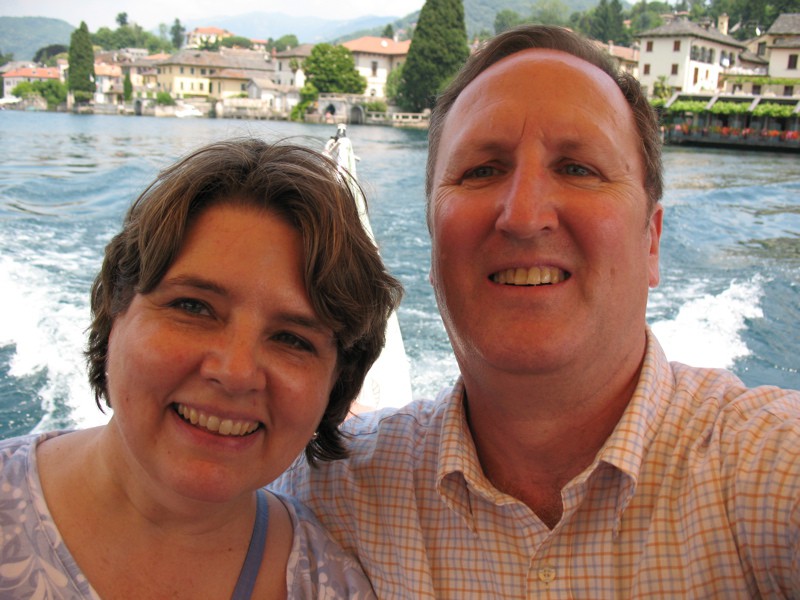 The reason why we look as if we had taken a dunk in the water is because it’s about 85 degrees and about 9000% humidity. I’m not exaggerating in the least. 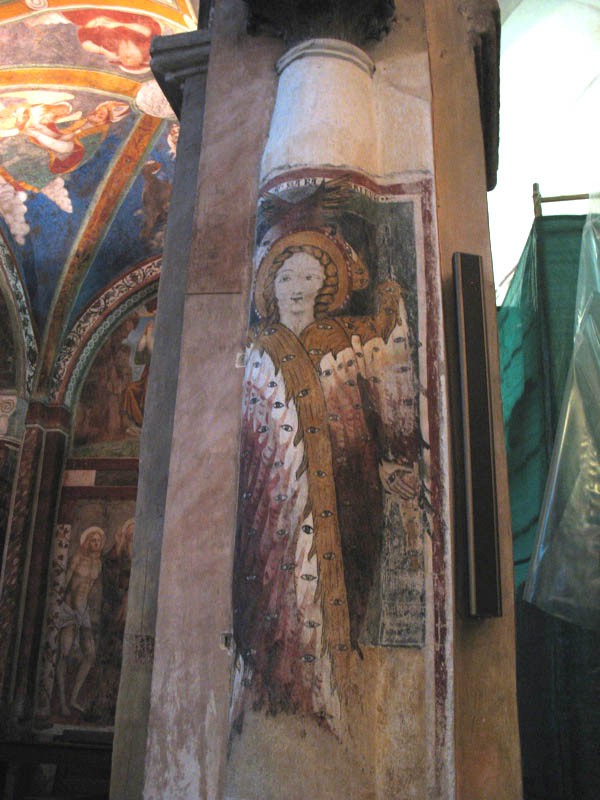 So we made it over to the island and the first tourist item is the church. As Dave noted, there are first-tier tourist attractions, like Venice, Rome, Florence, New York City. And then there are second-tier attractions like this church. Actually, it might even be a third-tier, but the depiction of the Lady of the Eyes on the pillar boosted it up a level. 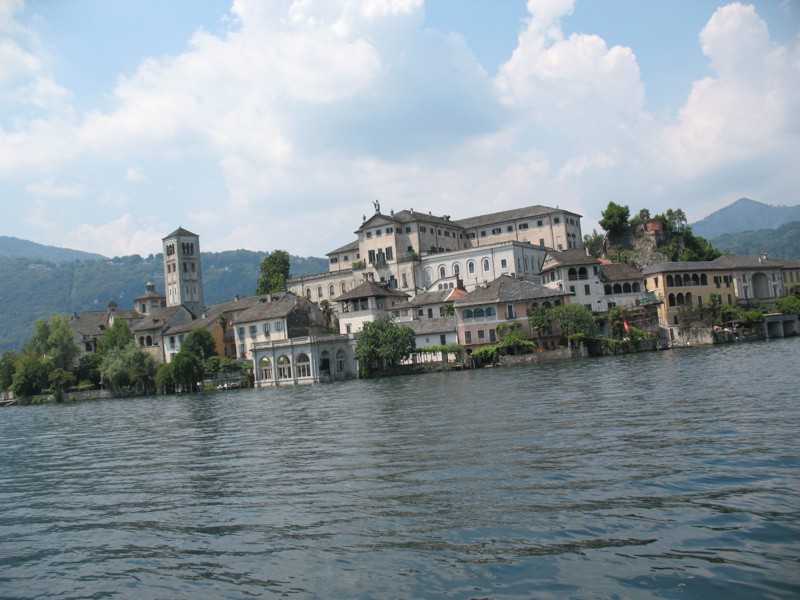 A view towards the little island across from Orta, with the Catholic Seminary.  We think we are headed over there to see the grounds of the seminary.  We find out later the truth. 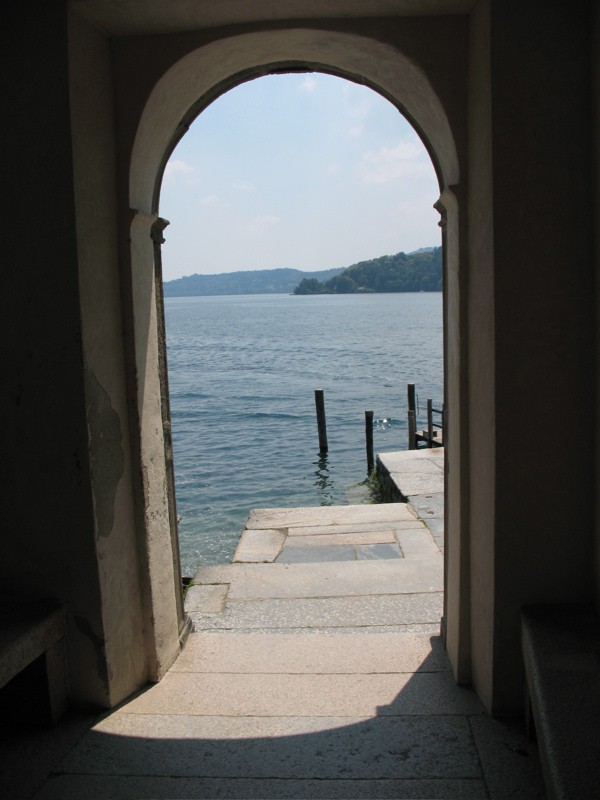 After we land, Dave takes a shot of a view out toward Lake Orta. 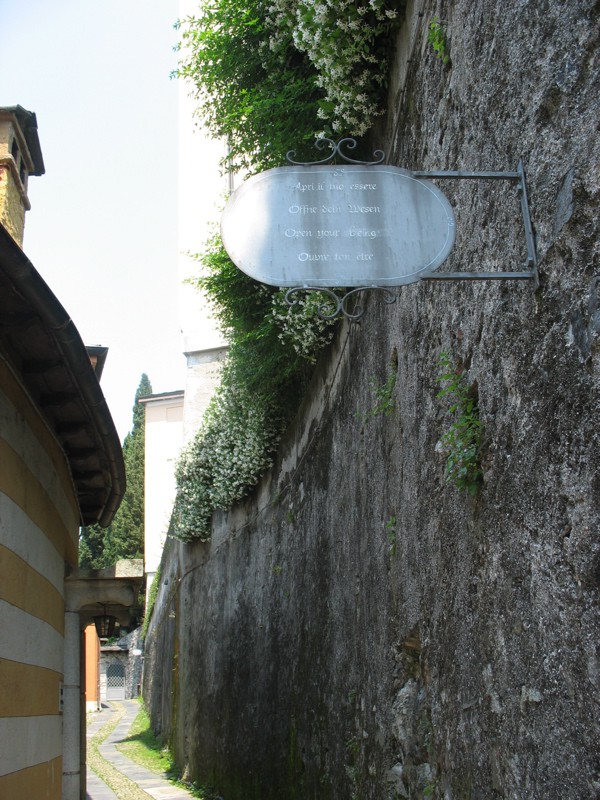 Okay, the walk/island are firmly in third-tier attraction. It was basically a circular walk around the Seminary. They didn’t want to hear all the tourists yackety-yak so they named it the Walk of Silence and had these signs posted every few yards to remind the visitors to Keep It Down. Only they had very weirdly Hallmark-ish phrases that just about made sense.

Except they didn’t really. Something was lost in the translation, I think. 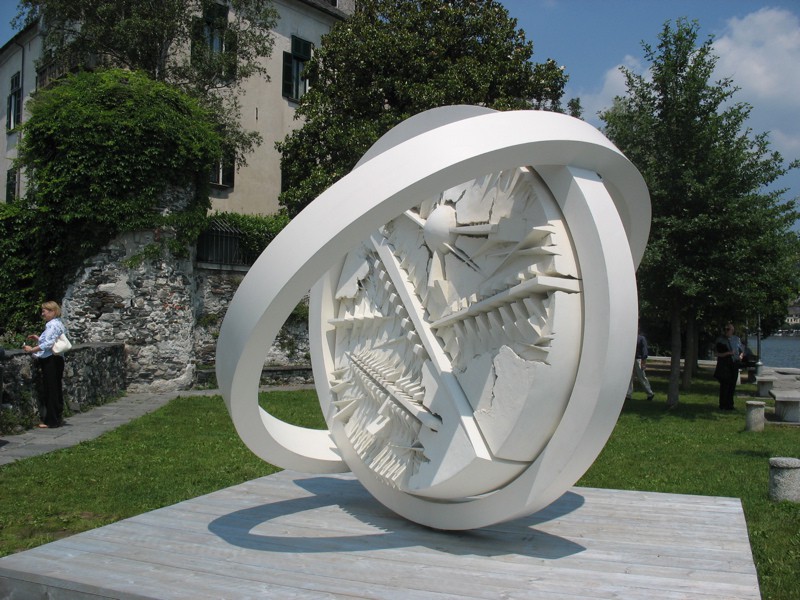 Another sculpture on the island.

We only had to wait 35 minutes for the boat that, according to the captain that dropped us off, comes promptly every 15 minutes. 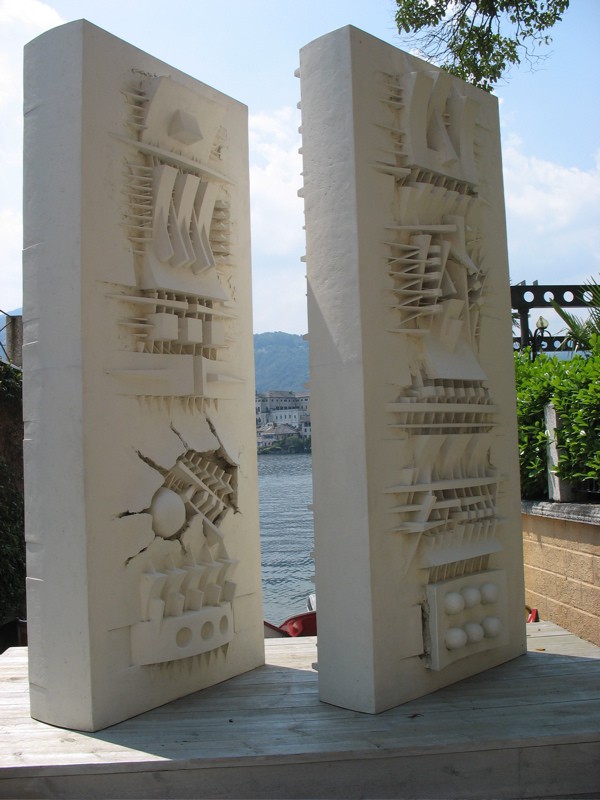 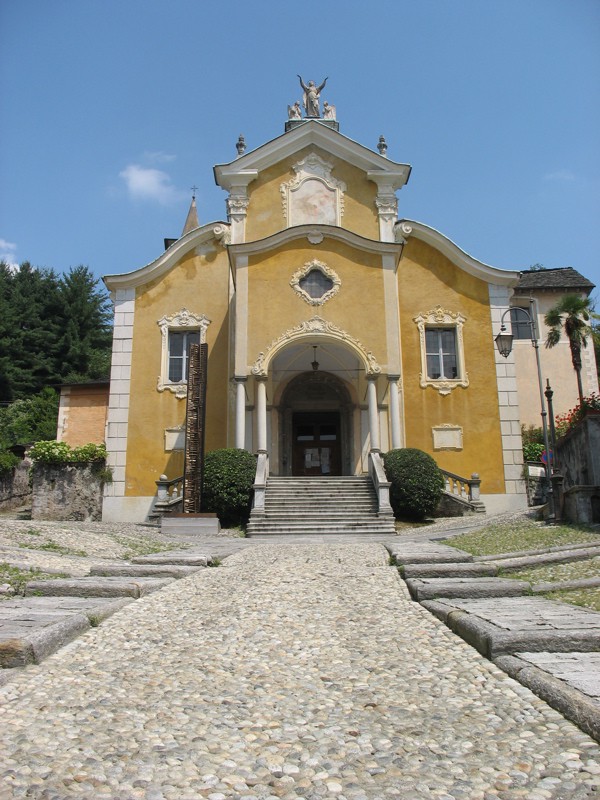 The road on the right came in from our mountain-goat climb to this church. We sat on the benches, drank our water bottles, and tried to recover. 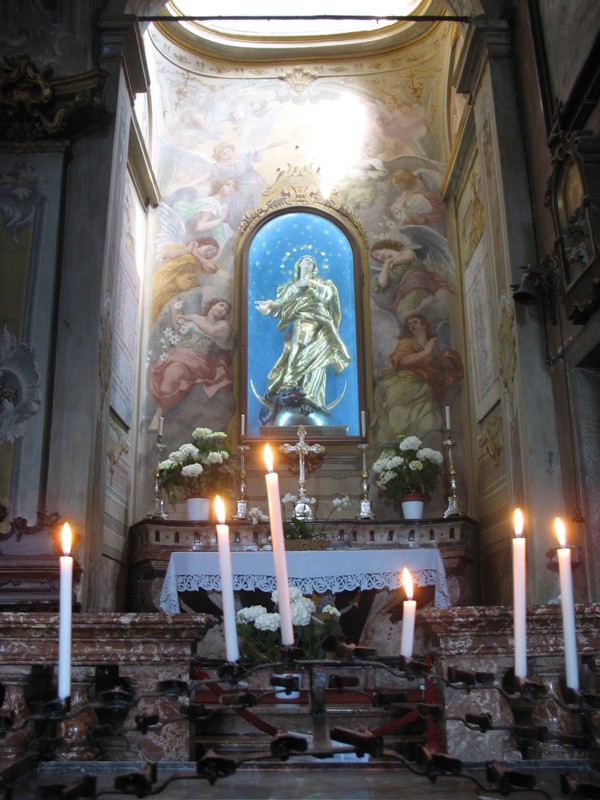 I thought this was an interesting Mary, with candles askew. 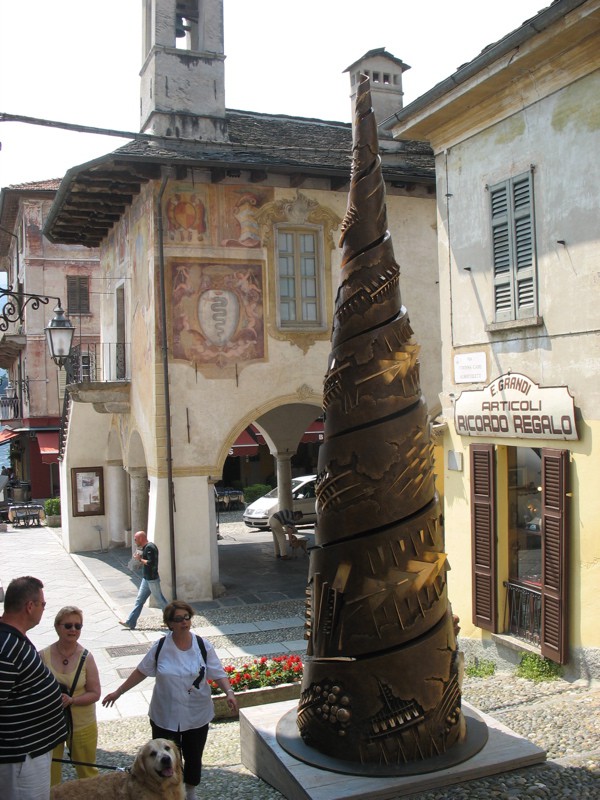 We came down the hill to see the sculptor has branched out to cones. We clambered back up to the car park, and located a quick-stop on the road on the way home and drank cold drinks. Well, first I held the can to my head, trying in vain to get the red to fade and to cool down. I felt better after having the A/C blast on my face. 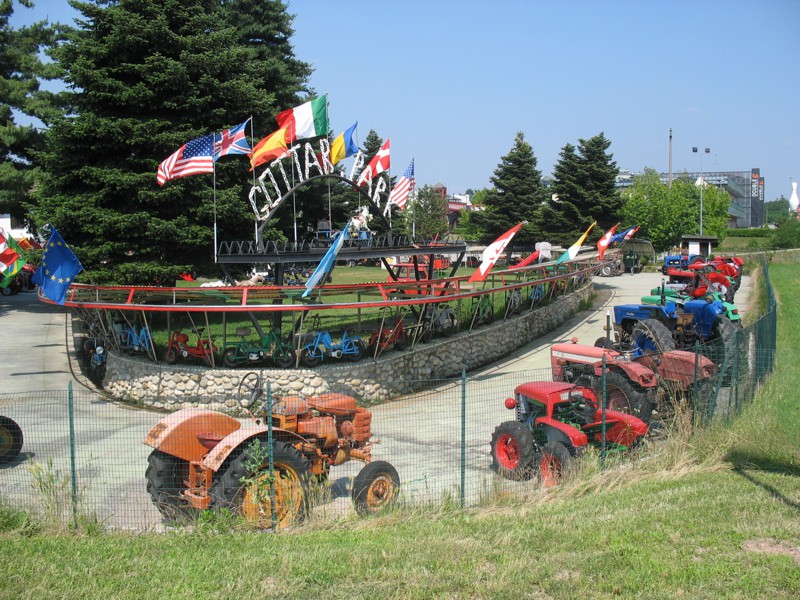 We passed this park on the way home. At first I thought the tractors were go carts and had a great time imaging children bashing into one another around the circular track. But Dave pointed out that they’re just stationary so kids can climb on them. Nobody was climbing today–too hot.