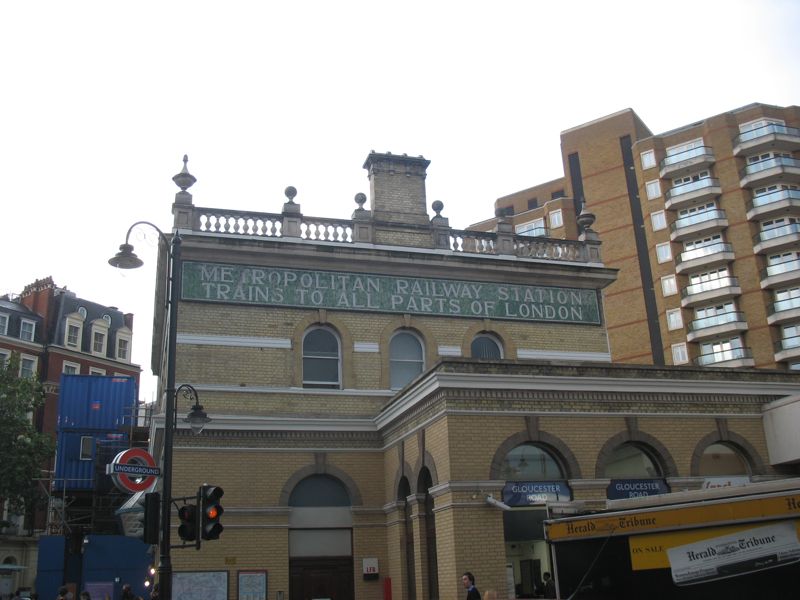 We began the day with a ride on the tube, entering from the tube station near our hotel. 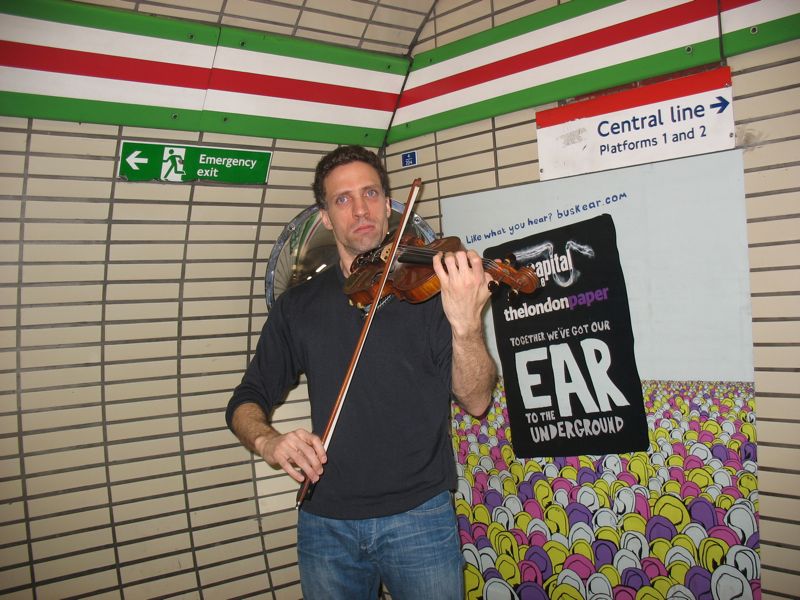 He wasn’t at our tube station, but somewhere in our day of traveling London’s mass transit. 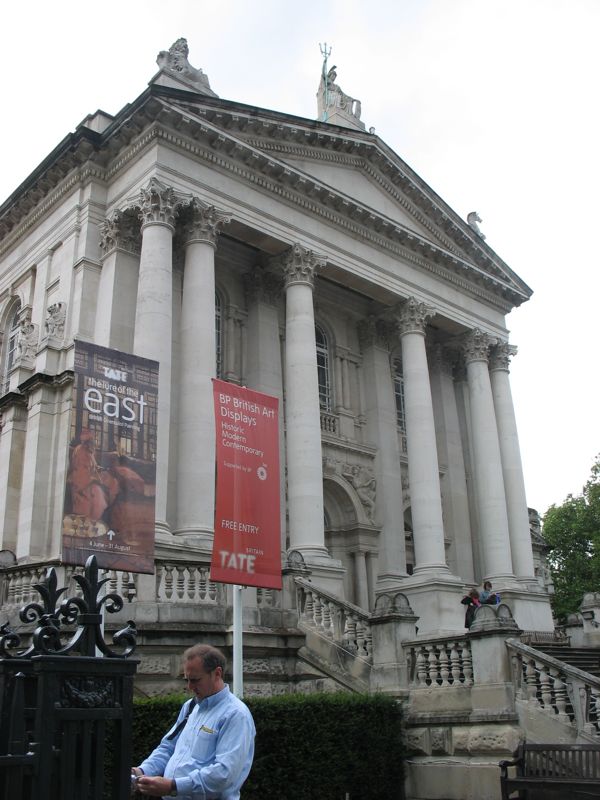 We started at the Tate. 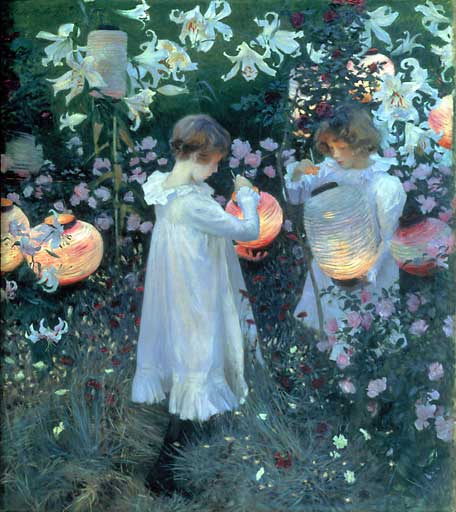 We headed for the Singer-Sargeants and enjoyed seeing Lily, Lily, Carnation, Rose once again, navigating groups of school children.

All of a sudden Dave says, “There’s someone running through there.”
I looked, didn’t see anyone. “Someone running?”
“Yes, right through here.”
Still didn’t see anyone, so we went to an exhibit by Alan Michael who’s realism really captured Dave’s interest. If we were independently wealthy, I would have bought him a painting for his birthday right then.

Then I saw the person running. They began at the far end of the Great Hall, dressed in running clothes and ran for everything they were worth to the other end of the hall where they turned a corner and disappeared.

It turns out we were “participating” or seeing Martin Creed’s Work No. 850. The guard at the hallway entrance and chatted about the runners. There were six runners, who seemed to come out of nowhere, and disappeared after their run.

The artist’s statement on the wall provided reasons for its genesis:
In Palermo we went to see the catacombs of the Capuchin monks. We were very late and only had five minutes to see it all before closing time. To do it we had to run. I remember running at top speed with my friends through the catacombs looking desperately left and right at all of the dead people hanging on the walls in their best clothes, trying our best to see it all… it was a good way to see it. It was that kind of delirious running which makes you laugh uncontrollably when you’re doing it. I think it’s good to see museums at high speed. It leaves time for other things.

Living in Riverside, I don’t get out to mainstream museums very much. But it’s this exhilaration at seeing something that stimulates, that tweaks your ideas of things that provides wonderful reason to brave the traffic, time constraints, weather, and my own inertia to take in different views of the world.

Outside the Tate.
We took a bus around town (see next post for our tourist tramping around) and headed to Liberty, another museum as my sister Christine refers to it. Good description. 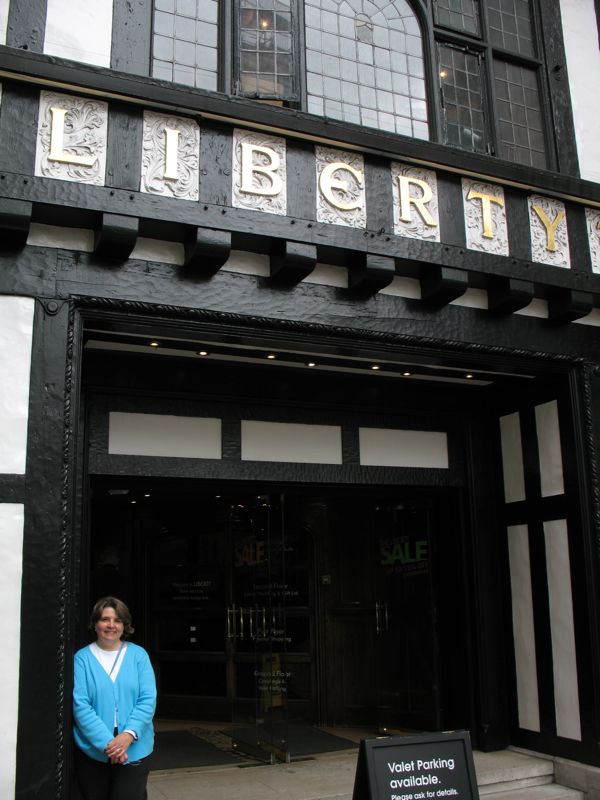 This photo is for my mother.
We had tea in Liberty’s once, she and I, after shopping. 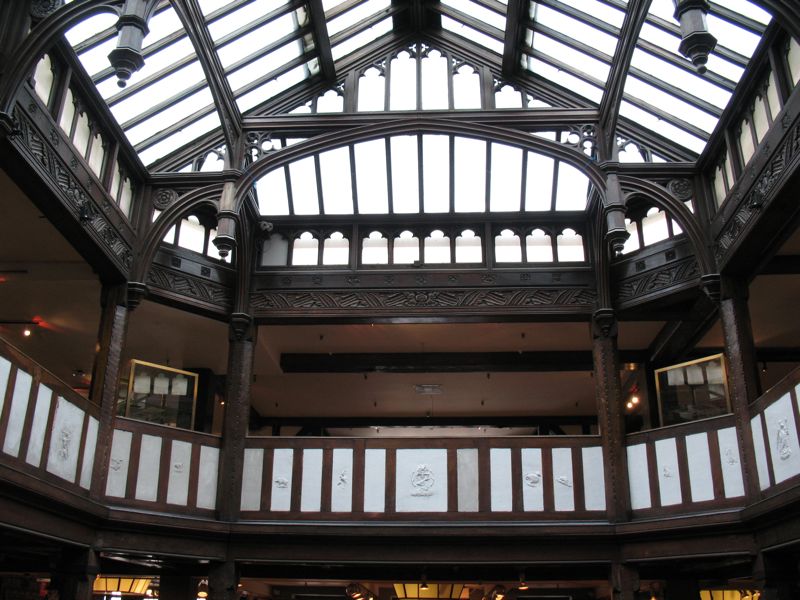 The store has an interior courtyard with carved woods, fine plaster motifs, elegant clothing and furnishings. I bought a half-meter of one of Kaffe Fasset’s prints. 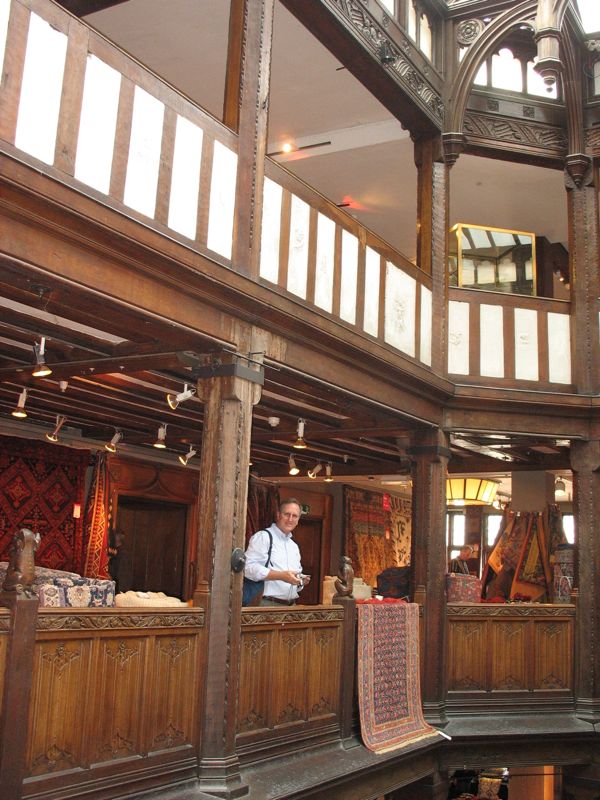 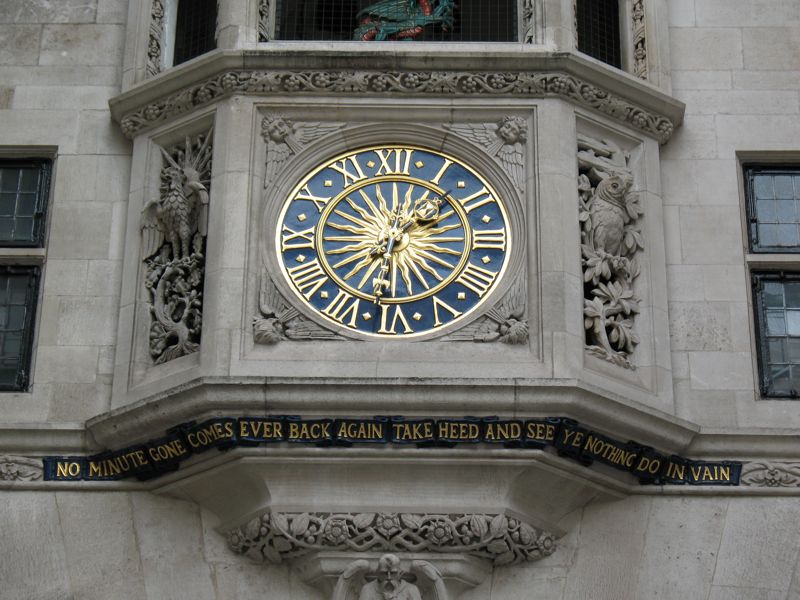 I grew up on aphorisms, so am attracted to them when I see them. This is on the catwalk between Liberty’s and another building. 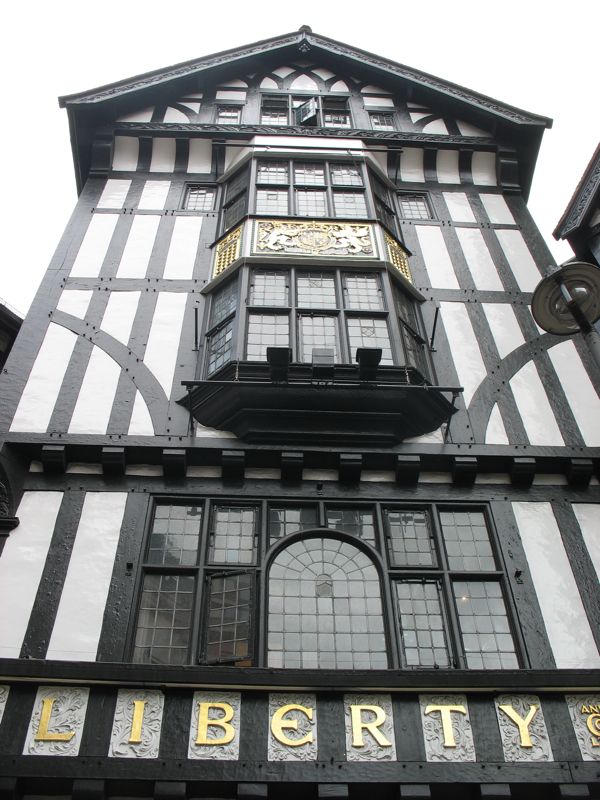 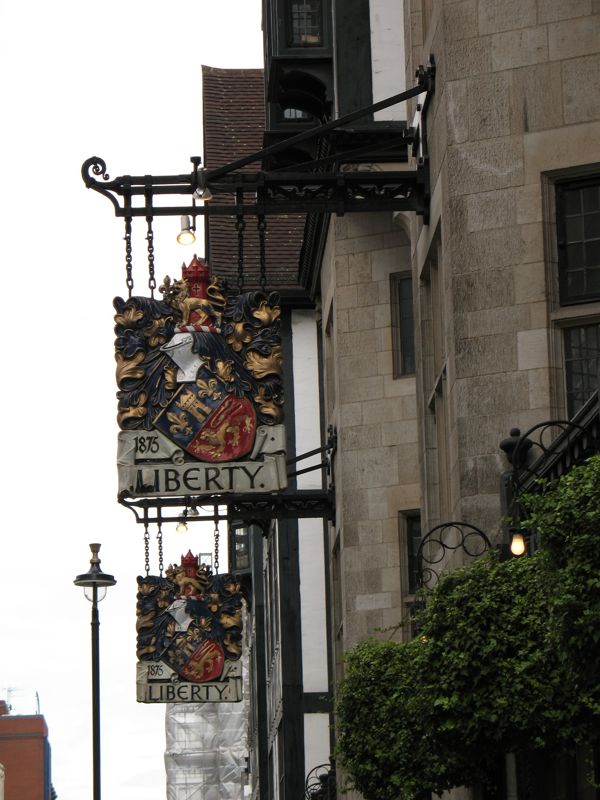 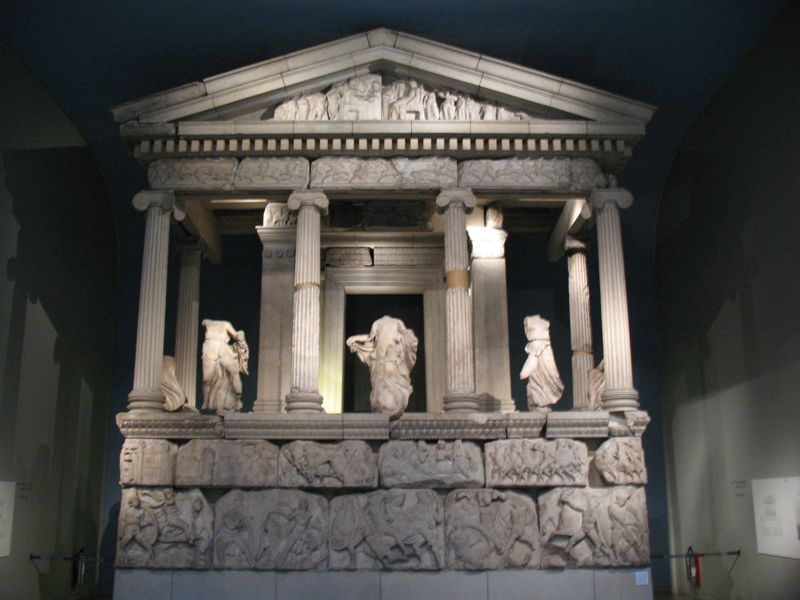 We took the tube then to the British Museum and Dave again found his bliss among the ancient stones and ruins. 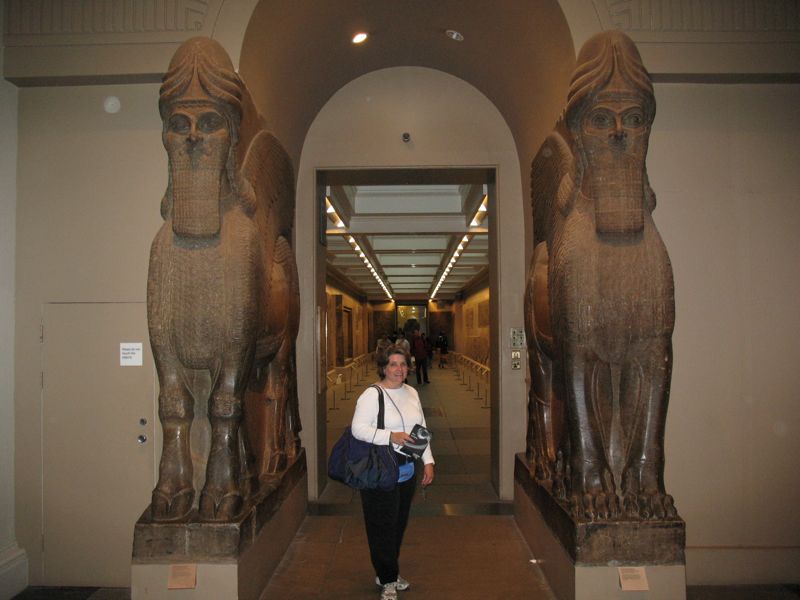 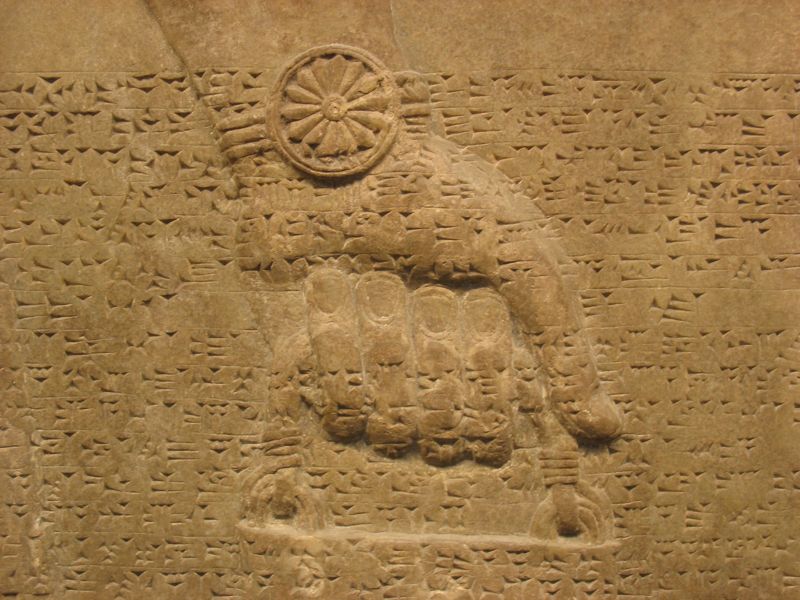 I liked the super-imposed writing atop the bas relief hand.

The museum courtyard has an undulating glass ceiling, with the reading room in the middle. This view reminded me of a pueblo-styled building.

I sipped a coke while waiting for Dave. A storm front had moved in and the thunder rattled the panes with rain washing over it in a muffled drumming sound. We were late in the day, and the galleries started closing. 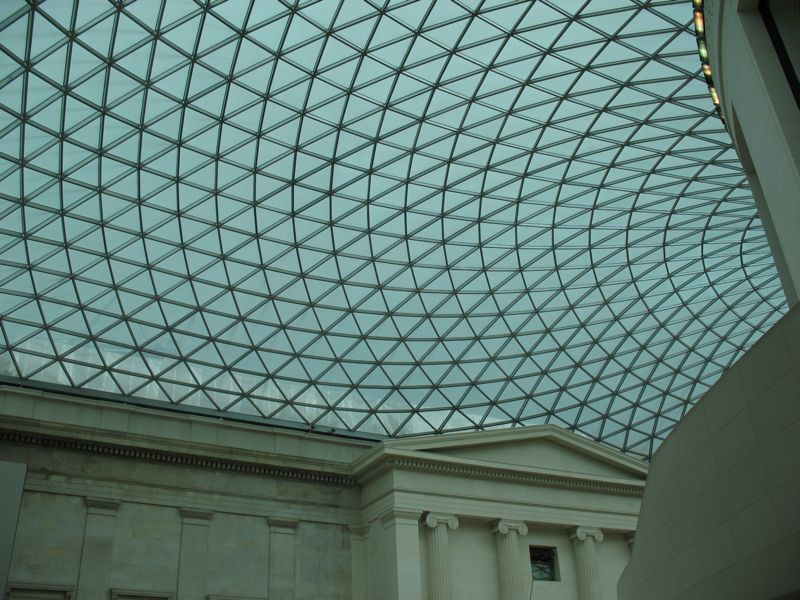 Dave’s take on the ceiling.
After, we stepped outside and called Chad from a phone booth. He’d called us from London the last time he was here and we wanted to return the favor.